Yet another numbered cake, I am almost reaching my deadline of having up-to-date posts of cakes!

Cars seems like a classic choice, lots of requests coming through for this. I’d say I’ve finally grasp the idea of this and this is the best cars cake I’ve made to date. Of course being picky, I’d think there’s a few things I can do better, but improvement is important too, right?

This time instead of blue background and white border, I went with the reverse and had blue as the border. Honestly I think it looks tidier and cleaner!

So this is a very funky order!

My colleague’s daughter was turning 10, and she loves everything purple, hates everything blue (I was told several times NO BLUE or she would refuse to even touch it)

She was having a dance themed party and had invited a few girls over. She loved the idea of zebra patterns and liked the disco dancing silhouette idea (which I gathered from all the photos they’ve showed me), so accepting a challenge of making zebra patterns with piped buttercream and no fondant, this was going to be a tough one.

Fortunately they were so happy with it that the figure not standing there wasn’t a problem, and it didn’t help that when I tried to put him back in, hre legs broke off, but they seemed ok with it and we went with the top half of her body planted in the cake.

On the side, they also wanted cake pops to match, and they really liked the idea of the skewer and the name badge on top, so I managed to make all the badges with specially printed purple paper and got the guest list so I could put all their names on there. She had asked for more than they needed,  so the extra ones I managed to put the mother (my colleague)’s name, the younger sister’s name and I didn’t know the husband’s name, so he unfortunately got a blank one, which he pretended to be slightly upset by this when he saw it.

So here they are! The double-tiered purple dance cake with 12 cake pops to match! They came back raving about them, so I think that was successful!

P.S. the cake was the chocolate mud cake with cream cheese filling. 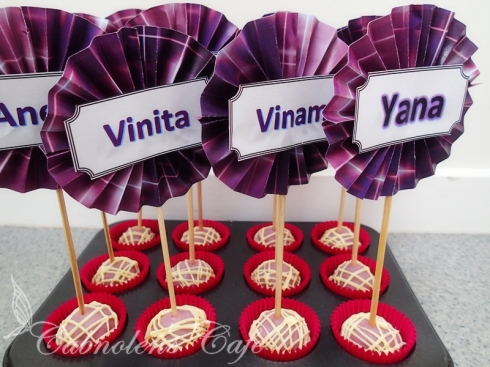 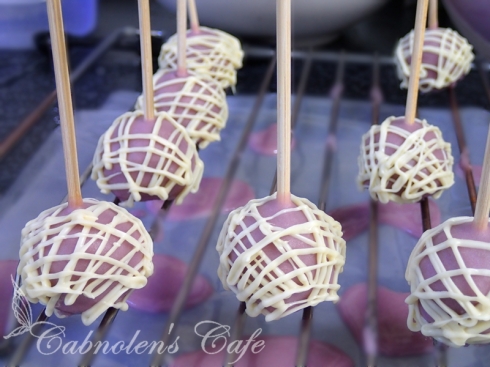 There are lots of numbers with my recent posts! It seems people are placing orders based on what they’ve seen previously made by me, and wanted one just the same.

This was the cake with this lady who ordered a black forest cake that looked just like the one I’ve made for her partner’s birthday. Unfortunately back in August (yes, we’re still in August!) cherries weren’t in season, so after searching up and down, I asked if it was ok that I used Glacie cherries instead. I am so glad she said yes, or else I wouldn’t know whose cherry tree to chop down to get those fresh cherries!

I must admit, due to the bright colour of the glacie cherries, I quite prefer this version, purely based on the look though, fresh cherries still can’t be beaten on taste!

This was a 7″ round chocolate chiffon cake with whipped cream, coated with lots of dark chocolate pieces!

YES! Finally, I LOVE barbie cakes! I was so excited when I got asked to make my second ever barbie cake.

The order was place via my Facebook page, which I was also in charge of getting the doll. A real Elsa doll was quite expensive, and at the end we decided any blonde barbie would do.

I was hoping to make her sleeves (the whole semi transparent look) but unfortunately it wasn’t so easy with buttercream, so I ended up scraping that idea and just went with a blue gown.

The skirt was probably the hardest part, as buttercream is quite difficult to smooth out completely – I tried my best.

All in all, I am quite happy with this cake, it wasn’t as elaborate as my previous barbie cake, but in the spirit of Elsa, that’s what her dress was closer to.

The inside was chocolate mud cake with chocolate buttercream.

Continued from last time’s Peko Cake, they seemed to like it so much that they’ve placed another order, this time for their son’s birthday, and have asked for exactly the same cake (strawberry filling with vanilla chiffon cake) but replacing Peko with Doraemon instead.

Consistency becomes the key! Had to make another cake that tasted just like the last one and it’s not mass produced, I had to trace back to see what I did?

The filling was filled with strawberries that I bought and soaked in syrup until they’re tender and juicy, then laid them all evenly between the slices. I wish there’s a photo of the cut-up cake to see the strawberries inside!

Nonetheless, they had provided a picture of Doraemon for me to use, so this isn’t exactly the same as the previous Doraemon cake I’ve made.

This was an order from TradeMe, all the way back in June 2014. Yes, I’ve been slack at posting, and need to do a big catch-up before 2015 hits! I will be good for Santa and try to keep it up to date before Xmas comes, just you watch me!

I thought I’d title this post “Carrot Cake #2″ as this is the second carrot cake order I’ve done – but then I looked back to my previous posts and I don’t see where #1 went? Ah well, will keep this as #2, as there will be a #3 coming soon!

The lady requested a standard carrot cake for her partner’s birthday, 9” round, and I could pretty much decorate it how I liked, so I thought I’d play around with the little carrots on the side – which turned out rather cute I thought! The frosting is of course the cream cheese frosting, which who can really live without, huh?

Now this is one giant cake!

My husband’s colleague had her 40th, and as she’s a gym bunny, we thought a theme around exercise is something to go with.

After some thoughts, I decided on something like dumbbells or barbells.

She asked for a chocolate cake, and it needs to serve around 50 people, so off I went!

It wasn’t until I hit Google that I discovered how hard it is to find dumbbell cakes. I mean, dumbbell/barbell and cake in the same sentence? That’s difficult!!

BUT, nonetheless, I was inspired by a dumbbell cake where the bells are made of round cakes cut in half vertically, then placed on it’s side.

I thought about it, and wondered what happens when someone’s standing on cake, tries to lift up a ridiculously heavy barbell?

She would fall through the cake, of course! So here’s my inspiration!

The cake itself was around 6kg, and used up 18 eggs! And good on Alex for eating up the barbell all by herself! I love it when someone loves exercises but is not afraid to eat cake!  What’s the fun in exercising so hard and not allowing yourself to enjoy a little?

Here’s the cake in its entire glory!

Now look at little Alex struggling to lift up the bells!

So, only 50 days until our wedding day!

I was very excited about this project I had set for myself, as we were planning for a pre-wedding party for our colleagues and friends in Wellington.

The theme was inspired by my gown which I had purchased a while back. I already thought I would wear this for our pre-wedding party, and the more I thought about it, the more I decided I really love the 50’s fashion.

I loved the pretty round skirt, the fedora hat and I am a huge fan of guys in suits in general.

When thinking of 50’s, Marilyn Monroe and Audrey Hepburn come to mind, and my e-invitation ended up looking like this: 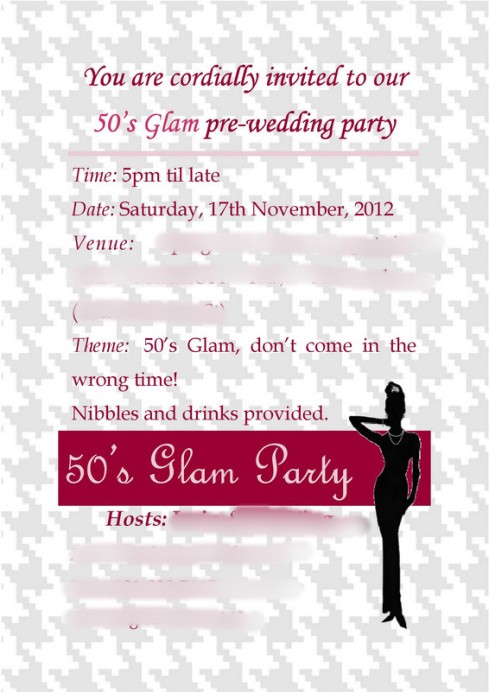 To go with this shade of pink/purple, I decided on a 2-tier buttercream covered cake, white base and some pretty patterns piped on it in the same colour.

It took me a good few days just to decide what flavours to make the cake, as my fiance’s colleagues have had the chocolate brownie way too many times (in my opinion), but it IS a beautiful recipe and I always go back to this when a chocolate cake is called for.

Vanilla was another safe option, but was a bit boring and unoriginal.

The top was a last-minute decision and I made the vanilla cake but added some coffee powder and Bailey’s and turned it into a 7″ coffee cake.

The filling naturally ended up being coffee buttercream, both between the chocolate cake and the coffee cake.

It took me 3 coatings on the cake and I decided I didn’t like the colour of the coffee as the background of my filigree piping.

So I whipped up another white batch of buttercream and coated the cake with that.

I suppose I should have done a bit more homework on how to make the coat smoother, but I got a bit tired from these 4 coats and decided that my piping will just cover the uneven surface.

I had decided on a pretty lace pattern for the bottom tier, repeated but in different orders for some variety, and the top just covered with filigree patterns.

And a few more photos of the cake:

Sorry for my horrid cutting-skill!

And just general photos of the food of the evening, which we made ourselves. The service staff at Sprig & Fern said “This was the finest looking buffet we’ve ever seen!”

In the end, when cutting up the cake, most people asked for the chocolate cake anyway!

I’ve been eyeing this cake for a while now, but never really had the opportunity to make it.

Thanks to my flatmate Gaetan who ordered a “simple vanilla cake” for 4 people (he was bringing it over to friend’s), I thought this would be fancy yet simple (was pretty impressed with myself that this took me about 20min to decorate, rather than 5 hours like most other cakes)

The result was pretty good, although I know where I could have done better, perhaps I will get another order for this simple yet fancy looking cake in the near future?

A while ago I made the Doraemon cake for the birthday of 2 cute little girls (twins!), and the mother said they were so happy with it that she’d be coming back to order her older daughter’s birthday cake later in the year.

Here it is! I was pretty excited actually, when the mother told me Olivia wants Tinkerbell. I have always liked Tinkerbell and my flower girls are pretty much inspired by Tinkerbell, too!

Olivia wanted chocolate brownie with pink icing, so apart from the white of the eye, there’s not a bit of white buttercream in this cake!

Tinkerbell was harder than I thought, as her features are so delicate, it’s pretty hard to get all the details on an 8″ cake. (this is probably Tinkerbell’s real size)

She brought the cake to daycare centre to share with her friends, and were of course enjoyed! (I am very proud of my collection of recipes!)

The mother turned out to be a friend of a friend when I finally met her in person, small world 😀