This was a TradeMe order, the birthday boy really loves this minecraft black/white cat, and wondered if I could put it on the cake!

The cake was made gluten free, vanilla flavour with buttercream filling and topping, the cat was interesting, very simple yet I had to incoperate 3 shades of grey and black to create this image. Maybe I could have made it bigger but the tail took up more space than I had imagined, so had to shrink the kitty!

This was a simple rosette cake, made for my husband’s dear aunt Rita.

It happened to be mother’s day AND her birthday, we invited her family over for lunch and secretly arranged with their son what kind of cake she would like, he said vanilla, simple and light, so a 7-inch vanilla chiffon cake with Chantilly cream was made.

As this was made in a hurry (we only just found out it was her birthday the day before), so a rosette cake I thought was the easiest WOW cake to make. The filling was just Chantilly cream, and to be less boring, I thought I’d do a duo-tone rosette, filled it with simple light pink and white covering the entire cake.

Said aunt was very happy, claimed this was the best cake she’s ever had! The pressure is on for next year I say! 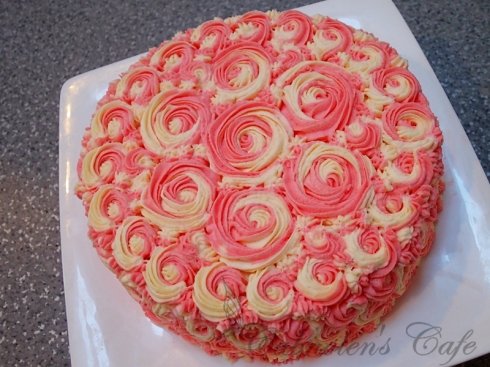 This was a TradeMe order, another interesting challenge for me, as most of my previous cakes were 2D.

After browsing through Google to see what other people have done with hair dryer cakes, I came up with my own way of building this cake, making a 9″ x 13″ sheet cake, a small round cake and a loaf, which I ended up cutting in half vertically, to construct the handle and the tube of the hair dryer.

The result I was quite happy with, the filling of course had to be cream cheese buttercream, and the brush was just pipped on, with the bristle pipped as individual strand – this took me longer than expected as I wasn’t happy with the original attempt and I had to redo it.

This was made for her dear sister Janet’s 60th surprise birthday, with her favourite colour red. I hope she was thoroughly surprised! 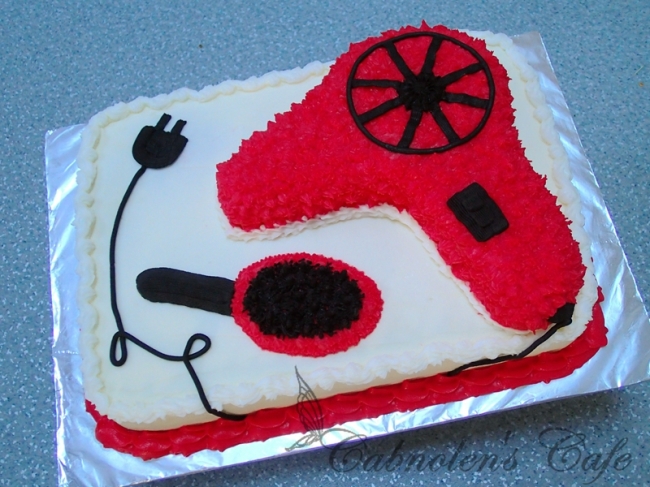 Friends of ours got in touch a while back for their mother Pauline’s birthday. Having had my dessert at their daughter’s wedding, she asked for a 9 inch chocolate cake, and her favourite colours are red and pink.

She didn’t want anything too fancy, but she liked simple flowers, so here it is!

The cake was filled with vanilla buttercream, and it was enjoyed among friends and family, just like a birthday should!

First order in 2015, last time I made a Mickey Mouse cake it was my first time trying the piping-cartoon-character decorating style, how I’ve come!

This is also one of the very few none-circular cakes I’ve made, also the first banana cake order I’ve had, so a few firsts!

The cake turned out very well, super soft and moist, it was filled with buttercream of course, and quite liked the red/blue border that I attempted. 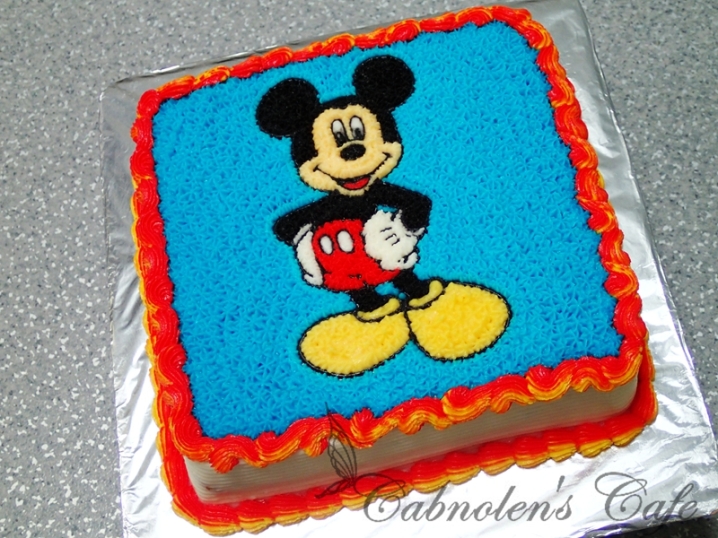 This was actually made end of November, 2014, an order from the Facebook site.

Up with the fashion, Sanvi asked for a 9″ Elsa & Anna pineapple pound cake for her 5th birthday. I thought it sounded like a good challenge, as it seemed quite complicated (eyes and facial features can come out very weird with just a tiny touch), so I said yes.

It turned out this one really was hard, especially their eyes which I had to tweak several times, also the amount of colour icing I had to mix used up lots of bowls! At the end of it, I think it was all worth it though, still not 100% happy with their eyes but I felt like the more I tweaked it the worse it would get, so I just let it go! (get it?)

cake was great…could see how much effort you had put into it…Thanks so much. .my daughter simply loved it 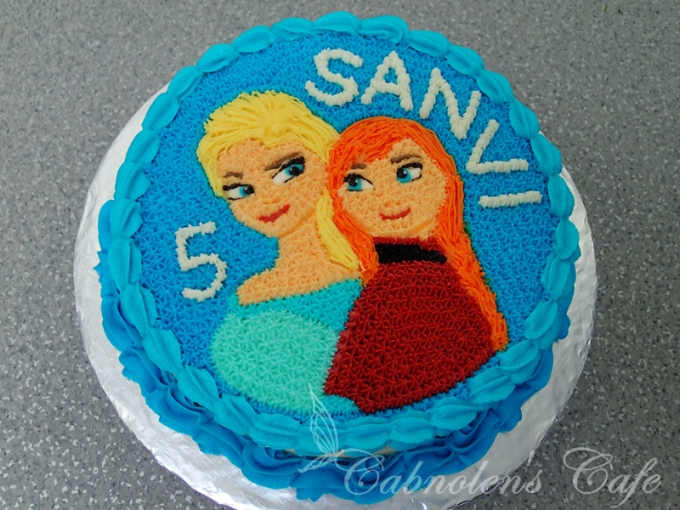 Yet another numbered cake, I am almost reaching my deadline of having up-to-date posts of cakes!

Cars seems like a classic choice, lots of requests coming through for this. I’d say I’ve finally grasp the idea of this and this is the best cars cake I’ve made to date. Of course being picky, I’d think there’s a few things I can do better, but improvement is important too, right?

This time instead of blue background and white border, I went with the reverse and had blue as the border. Honestly I think it looks tidier and cleaner! 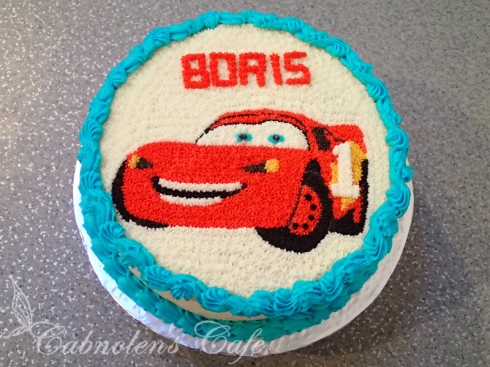 There are lots of numbers with my recent posts! It seems people are placing orders based on what they’ve seen previously made by me, and wanted one just the same.

This was the cake with this lady who ordered a black forest cake that looked just like the one I’ve made for her partner’s birthday. Unfortunately back in August (yes, we’re still in August!) cherries weren’t in season, so after searching up and down, I asked if it was ok that I used Glacie cherries instead. I am so glad she said yes, or else I wouldn’t know whose cherry tree to chop down to get those fresh cherries!

I must admit, due to the bright colour of the glacie cherries, I quite prefer this version, purely based on the look though, fresh cherries still can’t be beaten on taste!

This was a 7″ round chocolate chiffon cake with whipped cream, coated with lots of dark chocolate pieces! 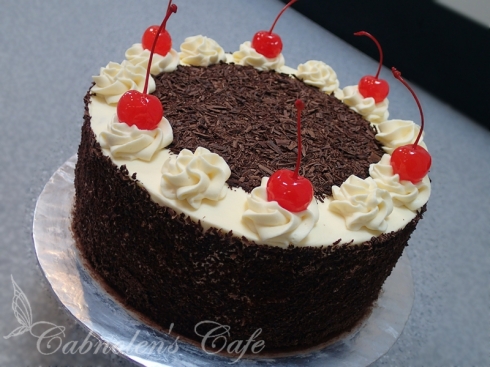 YES! Finally, I LOVE barbie cakes! I was so excited when I got asked to make my second ever barbie cake.

The order was place via my Facebook page, which I was also in charge of getting the doll. A real Elsa doll was quite expensive, and at the end we decided any blonde barbie would do.

I was hoping to make her sleeves (the whole semi transparent look) but unfortunately it wasn’t so easy with buttercream, so I ended up scraping that idea and just went with a blue gown.

The skirt was probably the hardest part, as buttercream is quite difficult to smooth out completely – I tried my best.

All in all, I am quite happy with this cake, it wasn’t as elaborate as my previous barbie cake, but in the spirit of Elsa, that’s what her dress was closer to.

The inside was chocolate mud cake with chocolate buttercream.

I did say a while back that there’s another one coming, right?

This was made back in early August, as part of the Wellington on a Plate event. Our workplace participated in the Wellington Bake Club, where a group of people (in this case, my colleagues) get together for 4 weeks, baking according to the challenges, and compete to become the baker of year. This was our second challenge: vegetable cake. I unfortunately took a day off, which happens to be the same day where we all present our work and have them judged. I ended up having to make it prior and leave it in the fridge at work, so they can bring it out and help my cake participate – the bad news is I didn’t get to eat any cake, but the good news is that I won this round!

So here it is, my trusty carrot cake that never fails to please! (thus far)